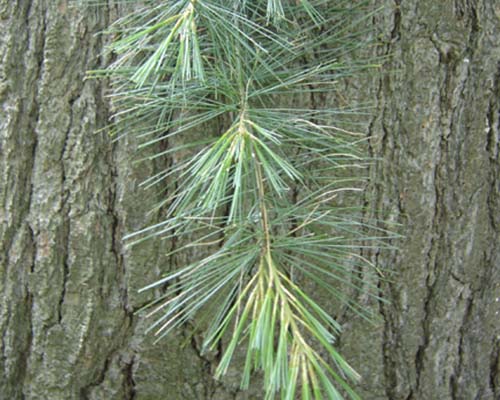 Gymnosperm means “naked seed” and comes from the same Greek root as gymnastics, which means to exercise naked. This group of plants is so named because the seeds are not enclosed inside an ovary, unlike in the flowering plants (see Plant Evolution IV). The gymnosperms originated about 319 million years ago, in the late Carboniferous. It is a diverse cluster of plants, containing cycads, ginkgos and the shrub Mormon tea. By far the most abundant group of gymnosperms is the conifers: pines, spruces, firs, hemlocks, cypresses, cedars, junipers, redwoods and relatives. The gymnosperms you will see on the Waldbauer trail are all conifers.

Gymnosperms possess several key evolutionary innovations compared to earlier groups such as the clubmosses and ferns. They produce sperm-containing pollen, which is carried through the air by the wind to the female. This innovation has freed these plants from the need for water for sexual reproduction. Also, they produce seeds that can be dispersed by vectors such as wind, water, insects or birds, allowing them to colonize new environments more rapidly. Look for the following species on the trail.

Balsam fir (Abies balsamea) is a member of the Pinaceae family found in cold wet woodlands, including mountain summits. Its symmetrical, conical shape makes it popular during the holidays, and it can grow over 60 feet tall. Blisters on its bark produce Canada balsam, a resin once used as a cement for permanent microscope slides. Its fragrant needles give the Adirondacks its characteristic aroma.

Northern white cedar (Thuja occidentalis) is a narrow, cylindrical tree that can grow to 70 feet and live for more than 1,000 years. It is commonly found along streams and lakes as well as in Adirondack swamps. Despite its name, it is not a true cedar but rather a cypress — in the Cupressaceae family. Its leaves are flattened and scale-like, and its bark is reddish-brown with a shredded texture. It is also called arborvitae, Latin for “Tree of Life”, for its alleged medicinal properties.

Red pine (Pinus resinosa) is a member of the family Pinaceae found in relatively poor, sandy soils. It can grow to 50–80 feet and live for over 350 years. It has needles 4–6 inches long in clusters of two. Its bark is typically orange-brown and gradually becomes gray-brown with shallow fissures and broad flat ridges toward the base of older trees. Red pine is often used in reforestation and sometimes as an ornamental.

White pine (Pinus strobus), in the family Pinaceae, is a generalist found in the Northeast, including the Adirondacks. This is the tallest conifer, growing to 100 feet or more. Being the tallest tree in the forest, they are often easy to spot sticking out above the surrounding canopy with their tallest branches shaped by the prevailing winds. Its needles grow in clusters of five. Historically, its long, straight trunk was used for the masts of sailing ships. Today it is widely grown for lumber.

Red spruce (Picea rubens), in the family Pinaceae, is the most common spruce in the Adirondacks, found in pure or mixed stands growing to 60–70 feet. Its hardened sap can be used as a sort of chewing gum. Its needles are yellow-green, about one-half inch long, four-sided, and sharply pointed, and extend from all sides of the twig. Its scaly bark is gray-brown on the surface and reddish-brown inside.

Incidentally, the name “Adirondack” was the Iroquois nickname for their neighbors, the Algonquins. It means “tree-eater” in reference to the Algonquin custom of using the inner bark of the white pine and other species for food in winter. Dried and pounded, this inner bark can be used as flour.

Scots pine is also present on the Waldbauer trail, but is discussed at the Non-Native Species station since it is not native to North America.

Eastern hemlock is discussed at the Nurse Logs station.

See the Winter Survival and Biomimicry stations for more about conifers.